Every fan of dystopian science fiction knows about the urban hellscape. A crowded, often dirty, dark and rain-soaked, world of beaten-down figures ambling silently through a forest of cheery billboards hawking brightly-colored products that are obviously more aspirational than they are practical. In fact, one of the most common tropes in the language of apocalyptic film is to juxtapose the haggard and ashen every-man protagonist against a backdrop of advertising space filled with sparkling plastic smiles, fantastical designer clothes, and the latest luxury flying car. The image that always comes to mind for me, in this regard, is from the movie Blade Runner 2049 wherein the hero, a replicant police officer named K stands on a darkened, drizzling, walkway as a gigantic computer-generated hologram of a naked woman bends down to solicit him. This is Joi, a virtual companion available for purchase in Villeneuve’s version of futuristic LA, a companion which literally transforms from moment to moment depending on the user’s specific sexual and emotional desires. Like most modern dystopian fiction, the symbolism of Blade Runner shows us a world of unfettered advertising meant to warn us about the impending victories of equally unfettered capitalism.

While this dismal imaginary of a world overtaken by unavoidable, omnipresent advertising is bleak, it speaks to a very present concern. Movies and books that involve speculation about just such dystopian futures are cautioning us about the slow but rising boil of animosity between advertisers and consumers. What I mean specifically is that we need to start talking about the entitlement of ads and the belief that advertising has a claim, and even a kind of expressed privilege, over our lives and our public spaces.

Just look at this description of graffiti versus advertising posted by Mad Men Marketing Inc. in Jacksonville, FL, for example:

Note especially the line, “A lot of graffiti tagging can be washed away, or painted over. Why? Due to the fact that it has no right to be there, where advertising on the other hand, has paid placement.”

No right to “be there”, to exist, in public space.

This is, of course, nothing new to commercialism. Or to science fiction. I still vividly remember the “TVs must be on at all times by law” episodes of Max Headroom (1987) and, of course, They Live, the 1988 sci-fi action film that features Roddy Piper as a drifter with special sunglasses that reveal that the ruling class are aliens concealing their appearances and manipulating people to consume, breed, and conform to the status quo via subliminal messages hidden in mass media. 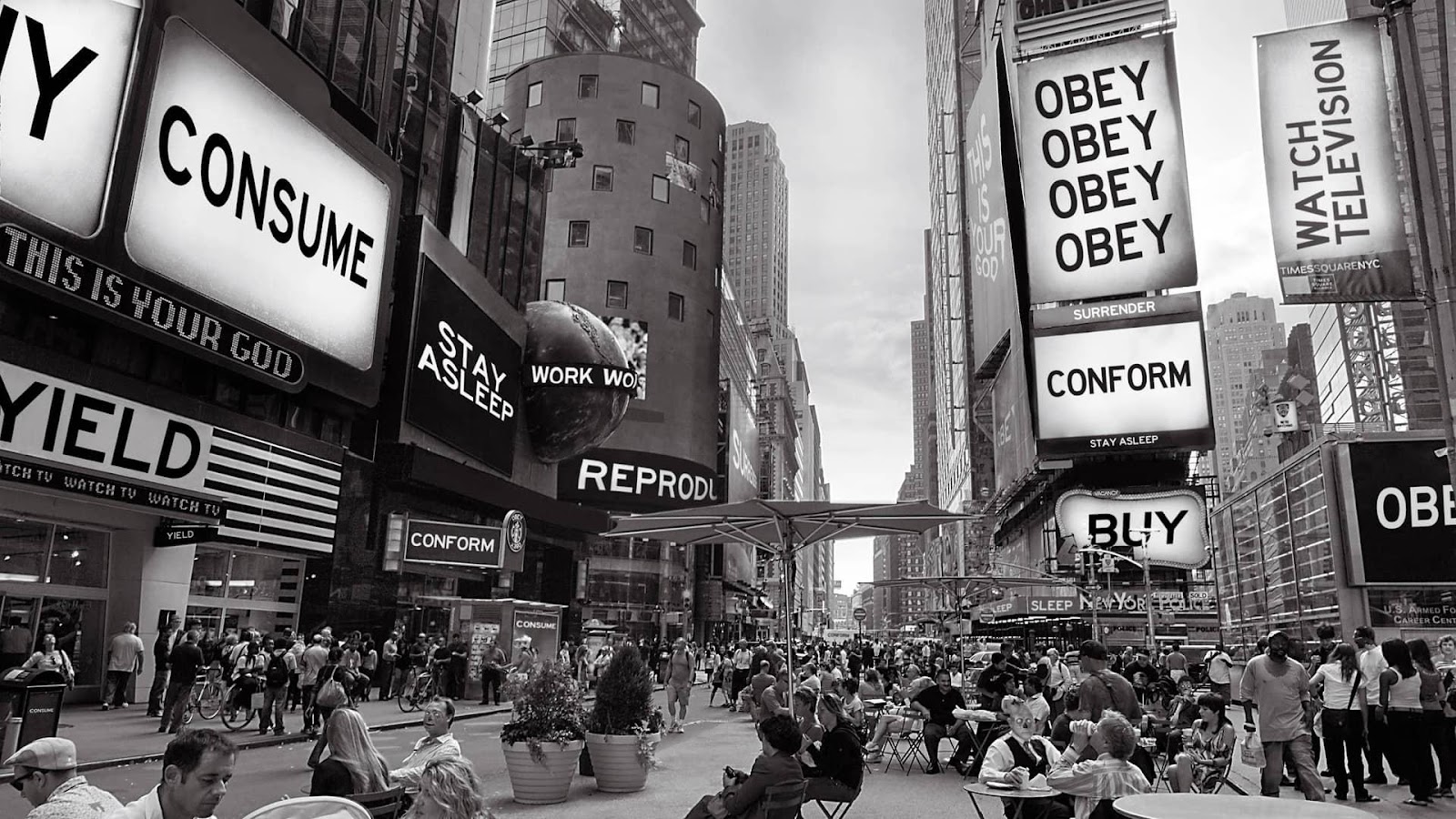 But while all of these representations are familiar to us in movies and TV, I see very few popular conversations about the antagonistic relationship that actually exists between viewers and marketers. We all sort of know we “hate commercials” and that ads are annoying, but the response of marketers for decades hasn’t been “make advertising something people might want to watch”. It’s “how do we force people to watch”. And beyond that, “how do we make them buy?”

This is predicated, at least to some degree, by the previous belief that people don’t actually hate advertising, that they just hate bad advertising. Now though, as advertising agencies begin to come to grips with the reality that people, especially the coveted market of younger people, would rather pay to avoid ads (or download increasingly sophisticated ad-blockers) than be subjected to yet another round of pitches for Liberty Mutual Insurance and HelloFresh, their response has been less than gracious. Instead of rethinking advertising as a model, they’ve doubled down on AI written ad copy and begun exploring methods for literally forcing potential consumers to hold still and be marketed to.

And we just seem to accept that advertising can fill our public spaces as much as it wants to. That marketers are somehow entitled to whatever space in our gaze and in our minds that they can possibly put up enough money to get ahold of. Ads are also often protected and to deface them in some cases might even be a crime. But more so, I literally cannot choose to NOT have ads in my life. I can’t walk down a public street without being bombarded with ads on billboards, pasted to walls in public transportation stations, and hanging from every storefront and lamppost. Even if I only ever watched public access television (no streaming, no internet platforms), I still would not be able to escape the words from our sponsors.

I am also well aware of the memes criticizing Netflix for “becoming cable” because they want to start inserting commercials into their content. Pay to stream AND be interrupted with more advertising. And just recently, within the past few weeks, I see that YouTube has very quietly gone from skippable ads at 5 seconds, then to 6 seconds, and now to 10 seconds. And I haven’t even touched on the wide-spread knowledge that virtually everything anyone ever does online (of any kind) is tracked and recorded largely for the purpose of tailoring more targeted advertising for that user the next time they log in.

No wonder this is starting to feel like a fight.

Unfortunately, it’s only going to get worse.

As artificial intelligence and algorithmic surveillance become more ubiquitous, we should really start to think about our relationship, not just to internet tracking and data collection, but to the fundamental relationship between audiences and marketing that these technologies are products of. In fact, I am already seeing suggestions, filtering out of tech reporting, that are starting to look truly dystopian. For example, eye-tracking to ensure that you don’t look away as the ad is playing on your device. Or, Apple wanting to insert ads into pre-installed apps on its iPhones (like Apple Maps) that you would be forced to watch in order to use the functionality. In one particularly wild stunt back in 2017, a Japanese start-up amassed a staggering amount of funding to begin a program for planting advertising on the moon. Nothing, not even a night under the stars, not even the open sky, is sacred to branding. We aren’t even successfully living in space yet and already marketing companies are ready to smear their brand-names on every surface they can conceivably reach.

I get, of course, that having a site and a platform or making a product is not free. There are typically only three primary ways for many of these service companies to ensure revenue: having a government or an individual pay to access or subscribe, charging a browser to use a site, or selling ad space. But let’s not pretend that the major corporations dominating the advertising landscape are in any way destitute, which really makes a lot of advertising more like airline baggage fees. It’s not that they need it in so much as it is an available method to make more money. A method that is absolutely in league with a deeply entrenched corporate belief that the public space belongs to them (for a nominal fee, of course). And that it is just there, like some “undiscovered” land, to be taken over, possessed, and staked out with a logo on a flag.

Today, we’re policed by ads. Targeted with products and services by what a surveilling algorithm “thinks we’ll like.” But people usually know when they are being sold to and when they are being solicited for money. It is not always so clear, however, when a company is seeking to influence their spending by attempting to directly control and shape their desires or their perceptions about what is normal and necessary in their world. Ads, not issues, shape political candidacy and voting patterns. Ads, not conflict, drives military and law enforcement recruiting. Ads drive traffic to video sites – many of which contain offensive, racist, or misogynistic content spiraling into conspiracy theories and hate. And there is no way to opt out. Ads are personalized, and they are unavoidable.

Ultimately, I know that the primary criticism of what I say here will be something to the effect of, “but how will legitimate advertisers inform the public about their products?” Since “exposure” is a term that’s both vital to the success of most businesses just as much as it is an occasional weapon against actually having to pay for what you purchase.

To this I say, we live in an information age. An age of the internet, the search engine, the review site, and social media. Advertising to inform is obsolete. All that remains is advertising to manipulate. The “subtle, persistent, unavoidable presence that creeps into the reader’s inner consciousness. A mechanical association is formed and may frequently result in an involuntary purchase.” (Emily Fogg Mead. 1901). So, let’s start imagining a world without it. A world free of sponsored links and banner ads and highway billboards. A world free of corporate persuasion and political up-selling or Facebook ad-bot exploitation. A world with the freedom to never hear another earworm jingle ever again or face a crying child desperate for the next cereal or toy that has been shoe-horned into every second between their favorite cartoons. A better future, in the end, than found in Blade Runner or They Live, should surely have been inevitable by this point.

The first step though is to accept it: people hate ads. Yes, all of them. End it and let’s reclaim our space.

[Image of the man standing in front of Times Square is by Joshua Earle sourced from Unsplash.]

[The three in-text images courtesy of the author.]